The Harvest is Ripe…

For me, there is nothing like live music. I admire those who have been blessed with musical talent and I enjoy music of most genres. Last night I had the privilege of attending Carlos Santana’s show at the House of Blues at Mandalay Bay in Las Vegas. Until now, I’ve been a very casual fan, if that. It was a business event and I was given a free general admission ticket along with the other business colleagues attending the conference. “I’ll stay for a few songs, then I’ll sneak out to bed.” Was I wrong or what?? His music is infectious, and I found myself not wanting to leave. Just over two hours later, I’m on my feet with the rest of the crowd applauding this man who has truly mastered his craft.

Carlos Santana performing at the Mandalay Bay House of Blues, February 2, 2017. He is a master at his craft, and his music is infectious! Taken on my iPhone.

A little more than halfway through his show, he spoke to the audience. He told them that there are people out there teaching about “wretched sinners”, that those people are mean and we should run from them. He said that we all have this light inside us, and we should live out our lives in that light, enjoying life, being kind. Many in the crowd enthusiastically received and applauded his message. And that made me sad; sad because the only part of the Gospel message he’s apparently heard is the part about sin and death. If he only knew how beautiful the other side of that coin is – the truth about redemption, salvation, and eternal life through Jesus Christ, he could have shared that Truth with his audience.

As he launched into his next song I looked around the room – all those people. How many know Christ, and how many don’t? How many took his false message to heart? I turned to the colleague standing next to me and said, “His theology is a bit off.” My colleague responded, “He’s talking about his god.” 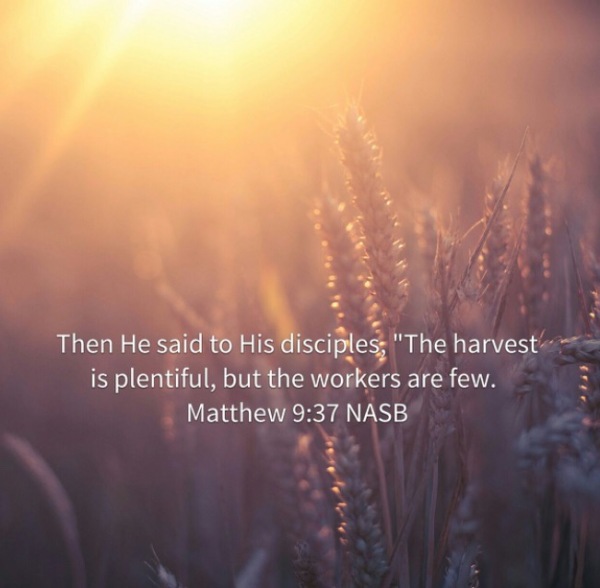 We live in a lost and fallen world. As Jesus said, “The harvest is plentiful but the workers are few.” (Matthew 9:37) My sense of urgency is increasing, but I sometimes struggle to find my place. Talking about things of God is easy in church, but it’s frowned upon in the workplace. Screaming the Gospel at a colleague I just met in a loud music venue doesn’t seem right either. I know God wants me to share the Gospel. This morning I prayed about the harvest and my role in helping gather it. I look forward to seeing how God chooses to use me, and I pray that He will give me with wisdom and courage to seize every witness opportunity He presents.